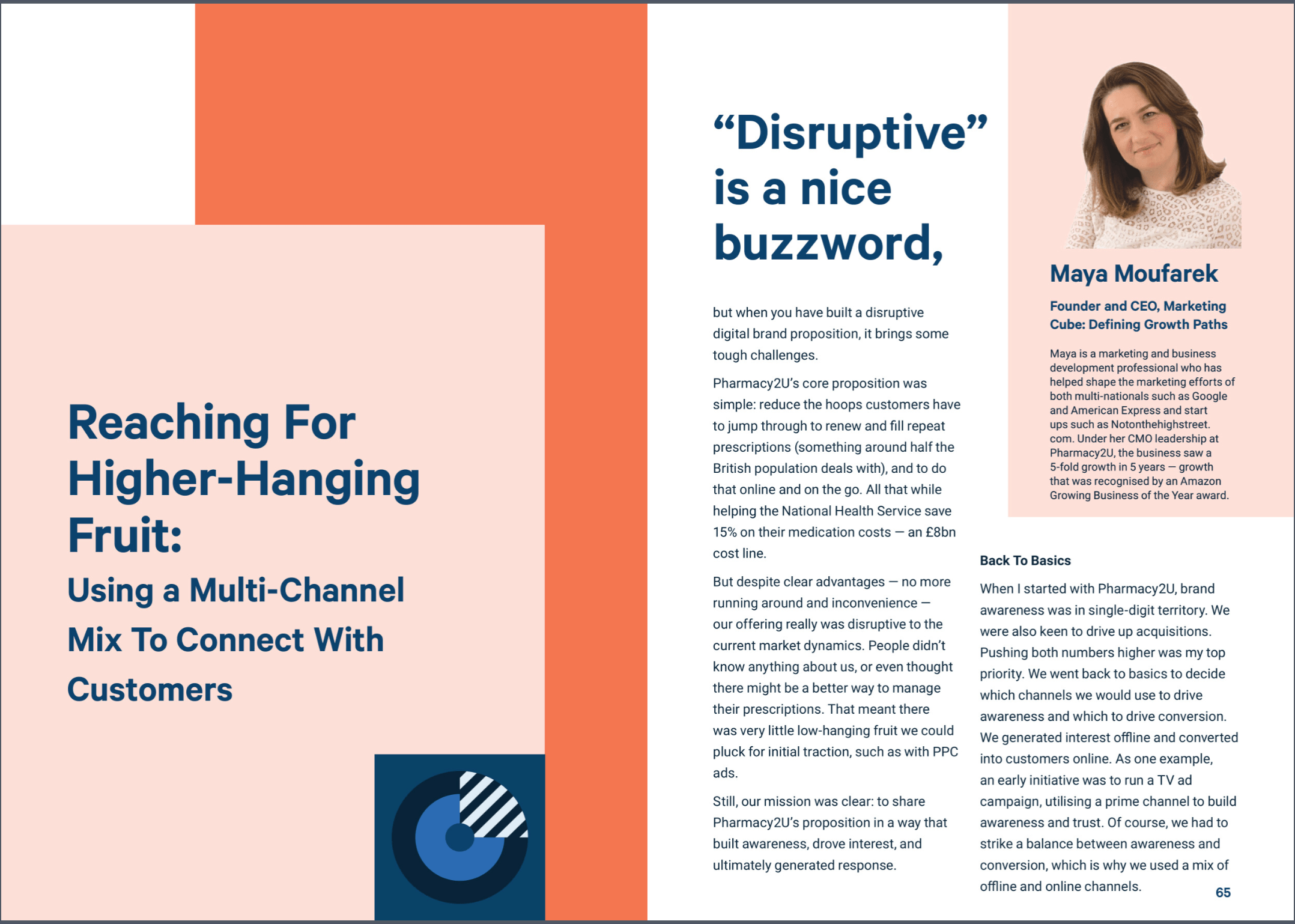 Earlier this year, I was invited to contribute a chapter to – The Performance Brand – a book that Attest, a survey platform for marketers. The book is now live here and I am excited to share with you my chapter contribution to the Reach section where I share the Pharmacy2U growth journey I led as CMO.

Reaching For Higher-Hanging Fruit: Using a Multi-Channel Mix To Connect With Customers

Maya is a marketing and business development professional who has helped shape the marketing efforts of both multi-nationals such as Google and American Express and start ups such as Notonthehighstreet.com. Under her CMO leadership at Pharmacy2U, the business saw a 5-fold growth in 5 years – growth that was recognised by an Amazon Growing Business of the Year award.

“Disruptive” is a nice buzzword, but when you have built a disruptive digital brand proposition, it brings some tough challenges.

Pharmacy2U’s core proposition was simple: reduce the hoops customers have to jump through to renew and fill repeat prescriptions and do that online and on the go (something around half the British population deals with) while helping the National Health Service save 15% on their medication costs – an £8bn cost line.

But despite clear advantages — no more running around and inconvenience — our offering really was disruptive to the current market dynamics. People didn’t know anything about us, or even thought there might be a better way to manage their prescriptions. That meant there was very little low-hanging fruit we could pluck for initial traction, such as with PPC ads.

Still, our mission was clear: to share Pharmacy2U’s proposition in a way that built awareness, drove interest, and ultimately generated response.

When I started with Pharmacy2U, brand awareness was in single-digit territory. We were also keen to drive up acquisitions. Pushing both numbers higher was my top priority.

We went back to basics to decide which channels we would use to drive awareness and which to drive conversion. We generated interest offline and converted into customers online. As one example, an early initiative was to run a TV ad campaign, utilising a prime channel to build awareness and trust.

Of course, we had to strike a balance between awareness and conversion, which is why we used a mix of offline and online channels.

We Started With TV…

In order to build trust, we couldn’t ignore mass media. Fortunately, with a good part of our audience in the 60+ age range and watchers of daytime TV, we could run ads with cheaper ad costs. (The first campaign was in January, which has the cheapest rates for the year and helped us test and benchmark for future TV campaigns.)

Our first ads were education-focused: who we were, how it worked, and why you could trust us being the big themes behind the ads. While they were great for awareness, we couldn’t rely solely on TV to drive conversion.

…Jumped Into The Digital Realm…

TV was an ideal medium to build trust, but we also looked to digital marketing to convert that trust and awareness.

This meant clear messaging, with direct calls-to-action like “register today” or “call now”. It meant landing pages that both educated and encouraged response. And it meant moving into media where our audience was, whether that meant paid social ads or tweaking web content to maximise SEO.

…Then Went Outside The Box

Mass media and online are obvious channels, but we wanted to do more.

So, we expanded offline brand-building with other highly-targeted media. For example, most GPs sell media space on their practice walls, and some even run ads on a digital display. It made sense to buy ads with GPs as well as Hospitals, since that was exactly where our target customers would be.

We also launched several direct mail campaigns. These gave us the chance to share details about who Pharmacy2U was, our credentials, how it worked, and successful case studies in longer form for audiences that needed that.

As we rolled out our marketing campaigns, we tracked two primary metrics:

We compared the awareness we were getting vs our acquisition numbers (especially Cost Per Acquisition), aiming to maintain brand-building momentum while hitting customer acquisition targets.

Digging into conversion paths to get a better sense of how prospects become customers was something else we devoted considerable time to. Patterns, like customers clicking a PPC ad and then engaging on social media before they converted, helped us understand how the channels worked together. It also helped tweak our mix: if awareness wasn’t growing quickly enough, we would pour more into TV ads. If conversion was down, we would look at “final steps” like landing pages.

Our awareness tracking also looked at sentiment, which gave fantastic feedback on how to adjust messaging. When we got responses that indicated lack of trust in our brand, we knew to shine the spotlight on our credentials. If answers like “I don’t think they work with my GP” stacked up, we shifted the conversation to highlight Pharmacy2U worked with every GP.

However, we also got a lot of unusual feedback in sentiment-based tracking based on scare-mongering from poorly-researched articles. Things like “they’re privatising the NHS!” were not uncommon.

It was obvious people believed some of the myths around the NHS and our brand. To counter these, we added a “Pharmacy2U Explained” section on our website to clarify what we did, how we worked with the NHS, and other questions.

This type of content was rolled out over other channels, educating prospects and addressing objections that made them hesitant to join. This was important in conversion-centric channels like social media or PPC.

It worked. As later sentiment tracking showed, objections weakened as people found our content, got the full story, and had their myths “busted”.

Myth-busting wasn’t the only example of how we tailored our messaging “on the fly”. When we developed our brand proposition, it seemed logical that these two types of people would be especially interested in getting medications delivered:

But when we ran focus groups around age and location, we stumbled upon a third hyper-responsive segment: people with mental health challenges that made leaving their home difficult. This discovery came almost by accident, as some of the focus group attendees suffered from issues like anxiety.

As a result, we adjusted our communication to take this new segment into account. We also sought partnerships with certain charities to expose our brand to this audience, whether in our partner’s newsletter, on their website or at an event.

Getting On The Growth “Fast Track”

Over the five years of our marketing and branding efforts, Pharmacy2U has enjoyed large-scale success…

Our efforts have been a resounding success.

Awareness has jumped from a paltry single-digit to 25% of adults being familiar with Pharmacy2U. Our acquisition rate has reached a rate equivalent to opening a brick & mortar pharmacy every 2.5 days. And our proposition is no longer “disruptive”, but a growing part of mainstream conversation around digital health. 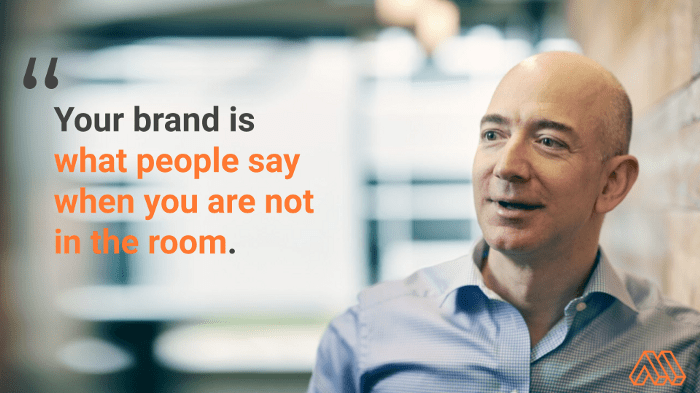 The Magic and the Logic of Brands

Where do you start when building a brand for your startup? Jeff Bezos has been famously quoted saying, “brand is what people say when you’re not in the room.” So...

Earlier this year, I was invited to contribute a chapter to – The Performance Brand – a book that Attest, a survey platform for marketers. The book is now live... 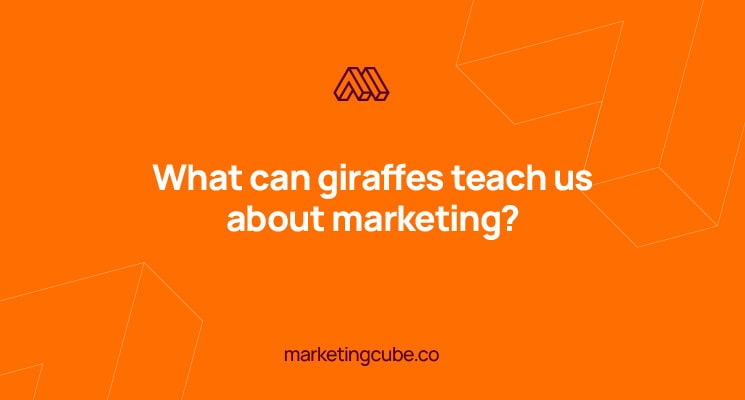 How do you fit a giraffe into a brand?

To build or revamp a brand successfully, you need to know who the business is selling to, where the pain points are, what resonates with the target market, and what...

I’m offering a free discovery call. Let's chat through your business goals – and see how you might reach them faster.